Scrubs are the universal uniform worn by doctors and nurses in medical settings. They come in a variety of colors and designs and are worn for both comfort and sanitary purposes. They are generally a blend of cotton and polyester to provide a wrinkle free professional look that is both comfortable and practical. The name originates from the fact that they were first worn by surgeons in a sterile environment in the operating room where they “scrubbed” in for surgery.

Nurses have always traditionally worn uniforms. Originally they were fashioned after nun’s habit and then evolved to white stretched dresses, white tights, nursing shoes and a white hat. Doctors, however, just wore regular clothes until the Spanish influenza epidemic in 1918 when awareness of infection become widespread and surgeons. However, it wasn’t until the 1940’s that aseptic techniques became a standard in an effort to prevent infections.

The original uniform was white, but with the bright lights in the operating room as well as the surroundings, surgical green became the standard color by 1970 to reduce eye fatigue, as well as to make the blood stains on the scrubs less obvious.

Originally the uniform was the standard surgical green for all medical personnel as guidelines did not allow for differentiation between departments and positions, but over the years exceptions have been made to distinguish between departments such as labor and delivery, emergency, etc as well as different positions such as nurses, physical therapists, office staff, etc. Eventually they became the norm for other healthcare positions. In most cases, except for surgeons, doctors still wear their own clothing under their white coat. 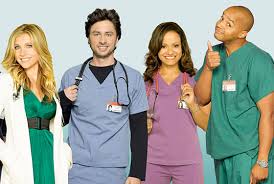 Scrubs quickly became the norm for other health care professions as well from outpatient care to labs to dentists offices. They are now available in a wide variety of colors, prints and styles. They can be ordered online from a medical site,purchased directly at a uniform store or and most retail clothing stores.

Some facilities employ a strict uniform code with different colors for varying departments and staff positions, while others allow for individuality. Hospitals tend to adhere to the strict guidelines, while other facilities such as private practices are for more  lax with the style of scrubs required for office attire. Some facilities even provide scrubs for their employees and will launder them, especially for surgical and other departments where there is contact with bodily fluids.

In addition to providing a sterile wardrobe and helping distinguish medical staff, there several other benefits of medical scrubs. They also help medical professionals easily identify bodily waste such as urine, blood, vomit, etc as well as other contaminants.

In facilities that provide laundering services for their staff, the scrubs are cleaning using high temperature machines along with special detergents and chemicals to remove stains. This ensures that the scrubs are clean and free of any fluids or contaminants. Scrubs are more practical to wear than regular clothing, which would be ruined if subject to such harsh conditions.  Scrubs are also more sterile and inexpensive than regular clothing so therefore they are a practical alternative to street clothing for anyone in the medical field.

Posted on February 1, 2016 by webmaster in Uncategorized
© 2015. Israelplasticsurgeries.com